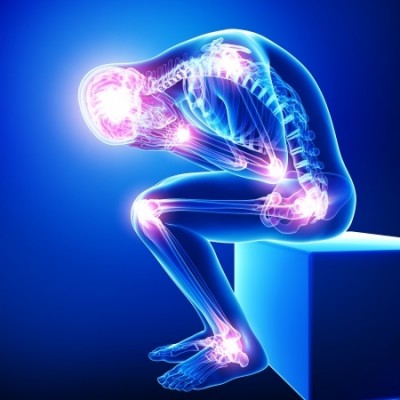 Chronic inflammation feeds a smorgasbord of chronic diseases. If you don’t have a chronic illness yourself, you know someone who does. An estimated 80 percent of visits to doctor’s offices are for issues relating to chronic disease. The CDC tells us 7 of every 10 Americans die of a chronic disease.

• Persistent or recurring disease, usually affecting a person for three months or longer

• Triggered by diet and environmental contaminants

• Standard medicine believes such conditions can be managed but rarely cured

If you hit your thumb with a hammer, the resulting swelling and inflammation are evident, painful, and short lived. Your immune system sends white blood cells and other hormone-like substances to help start the healing process. Inflammation here serves a good purpose.

Inflammation is the life-saving component of your immune system that helps fend off bacteria, viruses, fungi, and other microbial invaders. Without inflammation, we would be sitting ducks in a very hostile world, with no way to repair the damage consistently inflicted on us.

Inflammation goes chronic when there is a continuing stimulus. The stimulus might come from an army of free radicals launched every day when we eat foods made with processed vegetable oils – French fries, fried food, non-fat dried milk, powdered coffee creamer, most salad dressings, crackers, cookies, chips, and a plethora of other processed and convenience foods. The stimulus might be an allergy to wheat (gluten) which inflames the gut. Or a low-grade, lingering infection. Or a growing body burden of heavy metals, pesticides, and chemicals. Or a low-grade, lingering infection from an old injury or a root canal. There is a lot of opportunity in today’s contaminated, junk food-filled world for a combination of factors to always irritate the body’s normal functions.

Chronic inflammation falls below the threshold of perceived pain. You don’t think you feel sick, but a fire is quietly smouldering within you, upsetting the delicate balance among all of the major systems: endocrine, central nervous, digestive, and cardiovascular/respiratory. In a healthy body, these systems communicate with each another. With chronic inflammation, that communication becomes distorted.

Medical schools don’t teach much about the inflammatory effects of food, toxic chemicals, so the medical profession has been slow to appreciate the extent of the problem. “Researchers are linking inflammation to an ever-wider array of chronic illnesses,” reported Newsweek’s Anne Underwood in 2005. “Suddenly medical puzzles seem to be fitting together, such as why hypertension puts patients at increased risk of Alzheimer’s, or why rheumatoid-arthritis sufferers have higher rates of sudden cardiac death. They’re all connected on some fundamental level.”

Some 20 years after their discovery, and having endured a storm of criticism from the medical establishment, the pair was awarded the Nobel Prize in Medicine.

Their work has stimulated research into microbes as possible reasons for other chronic inflammatory conditions, such as Crohn’s disease, ulcerative colitis, rheumatoid arthritis and atherosclerosis, the Nobel assembly said in its citation.

Chronic inflammation has a damaging effect on arteries, which can lead to high cholesterol, heart attacks and strokes. Microorganisms cause inflammation within blood vessels. The inside of the arteries come under attack. Immune cells are dispatched to fight the inflammation, and then cholesterol is laid down over the wound like a Band-Aid. However, the inflammation is still active under that Band-Aid. In time, the Band-Aid bulges. In time, maybe a small part of the blood vessel gives way. Whoops! Now the body has to put a finger in the dyke. It uses a blood clot to do that. But if the clot breaks loose and goes to the brain, you have a stroke. If it goes to the heart, you have a heart attack.

Statin drugs, the best selling drugs worldwide, were developed to limit cholesterol. Now you can see why suppressing cholesterol production is not a good way to address the problem. Recently, we hear that statins’ best asset may be their anti-inflammatory properties. That would be a better approach, but there are better ways to reduce inflammation. Statins’ side effects include muscle weakness and mental problems. And, although drugs can suppress the inflammation, they do not put out the fire. They don’t bring a cure.

Chronic inflammation depresses the immune system and helps promote the formation of cancerous tumours. A substantial body of evidence supports the conclusion that chronic inflammation can predispose an individual to cancer as demonstrated by the association between chronic inflammatory bowel diseases and the increased risk of colon carcinoma. The longer the inflammation persists, the higher the risk of associated carcinogenesis.

Chronic inflammation destroys nerve cells in the brains of Alzheimer’s patients. The inflammation in a joint can eat away at the cartilage, and you’ve got a severe case of arthritis. In Rheumatoid Arthritis, the inflammation is systemic, eating away at the entire body, an autoimmune disorder. Inflammation of kidneys is known as nephritis and may cause kidney failure or high blood pressure. Unchecked inflammation in the pancreas can cause both pancreatitis, a potentially fatal disease, and type 1 diabetes, in which the pancreatic islet cells that produce insulin are destroyed. Inflammation of the small airways that transport air to the lungs may cause an asthma attack or chronic bronchitis.

What determines how inflammation will affect you? Your genes play a part. If arthritis runs in your family, then you very possibly have a weak genetic link in that regard, and you are likely prone to arthritis. For someone else, the weak genetic link may make them prone to cancer or Crohn’s Disease.

Food is the real key to chronic inflammation. Consider what our ancestors had to eat; they lived at a time when chronic inflammation and chronic diseases were not rampant. Everything came from nature, nothing from a food chemist’s laboratory. Nothing was homogenised, refined, or processed. There was no need for “nutrition labels” because the food was not so altered and compromised it had to have labels.

A diet that is rich in vegetables, fruits, and Omega-3 fatty acids tones down inflammation. One anti-inflammatory compound in food that has been studied extensively is curcumin, the yellow pigment in the curry spice turmeric. Greg Cole, professor of medicine and neurology at UCLA, has found that small doses reduce TNF-alpha and IL-1. Ginger, cloves and turmeric are also anti inflammatory spices. Cole considers curcumin a far safer Cox-2 inhibitor than, say, Vioxx. While drugs usually block a single target molecule and reduce its activity dramatically, he says, natural anti-inflammatories gently tweak a broader range of inflammatory compounds. “You’ll get greater safety and efficacy reducing five inflammatory mediators by 30 percent than reducing one by 100 percent.”

Transition to gluten free grains. Gluten grains are wheat, rye, and barley. Spelt has much less gluten than wheat, although it does still contain some gluten. Rice and tapioca have no gluten. If you do not have celiac disease or significant gluten sensitivity, try spelt bread and spelt spaghetti; a brand called “Pamelas” makes an excellent array of gluten-free flours.

Wheat grown today is extremely hybridized. It is higher in starch, and lower in protein and trace minerals. Wheat to day is also high in glutamine, an amino acid that has an inflammatory effect on the body.

Transition away from inflammatory foods like sugar, refined carbs (pasta, chips, crackers, cookies), and store-bought milk. Commercial dairy cows are fed an unnatural diet of grain that produces excessive omega-6 fats. If you are allergic to milk, as many are, that allergic reaction feeds chronic inflammation. Supermarket beef comes from cattle fed an unnatural diet.

It would be helpful if we would cook our foods at lower temperatures. Cooking foods at high temperatures causes AGEs – advanced glycation end products. (Also called glycotoxins.) AGEs are naturally in our bodies, but we drastically add to them by eating foods cooked at high temperatures. AGEs are excreted by the kidneys, whose capacity may be easily exceeded. As the level of AGEs buildup, cells start to signal the production of inflammatory cytokines. In general, frying, roasting, broiling, and “blackened” BBQ result in the most AGEs, meaning unwanted residues of hormones, steroids, antibiotics – and meat that is acid. Find out where you can buy grass fed meats. Break the habit of consuming acid foods like coffee and soda. Acidity is thought to be one of the principal causes of chronic inflammation. Drinks contain phosphoric acid, a major contributor to the development of osteoporosis.

Conventional medicine makes use of pharmaceutical drugs to suppress the inflammatory mechanism. Although pain medications can be very effective at providing temporary relief, they are powerless to stop what’s causing the inflammation in the first place.

It takes an integrative approach to put out the fire.

The benefits of reducing inflammation are immediate as well as long term. You’ll notice that your skin looks younger, your joints feel better, and your allergy symptoms improve. At the same time, when you reduce inflammation, you also reduce your risk of chronic disease and complications of ageing.

Inflammation Cause of Multiple Dieases